Posted on October 4, 2014 by formerdundeeman

What can you honestly say about the plans of various Scottish councils to chase 25 year old poll tax arrears based on voter registrations from the Scottish independence referendum? Think about what this means?  Why would they do this after more than two decades?  Simple, Labour want to ensure that never again do so many of the disenfranchised poor of society bother with registering to vote.  Fearing a demolition job at next year’s general election, Labour continue with the kind of nasty dirty tricks honed during the referendum. 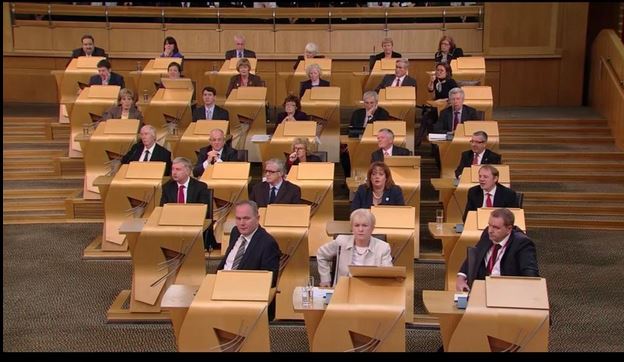 What kind of sick and twisted mind thinks up something like this? Sure it is a final sign (as if one was necessary) that there is no difference between Conservative and Labour.  Old Labour was against the poll tax.  Twenty years later they are happy to drag one of the most controversial Conservative experiments back out of the closet for their own deviant gain.

The photograph above shows the faces of Labour MSPs after being told by Alex Salmond that he will block any attempts to collect poll tax arrears.  Anyone questioning Salmond’s ethics in front of me better duck quickly – compared to the vast majority of British politicians these days, he is an absolute saint and I challenge you to prove otherwise.

Why Salmond does not have an even higher status in Scotland is beyond me and says more about the sickness at the heart of mankind than it does about Salmond.  He offered us the chance of dispensing with healthcare privatisation, fracking, nuclear weapons, tuition fees, prescription fees, poverty, inequality, illegal wars … we’d have had 100% electricity from renewables by 2020.  We’d have a political system that wanted to involve the people in the process, that would have seen town halls packed with an active, well informed electorate.  Who would not want that for their children and grandchildren?  But no, back in our wee houses and then steeped in our private demons, fears and greed in the voting booth we chose to back a system and people that represent something that falls not far short of evil.