The Rise of the Arsehole in Modern Society (Book Review) 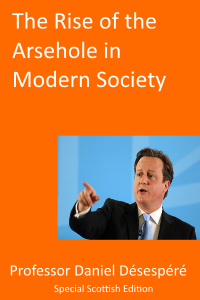 In what many will come to regard as his tour de force, French academic Professor Daniel Désespéré, charts the rise of idiocy in public life during the late 20th and early 21st century.  Using a mix of manual and computerized research backed by scathingly critical analysis, Désespéré conclusively proves that the intelligence – both intellectual and emotional – of prominent and private figures has been in steep decline in recent decades.

Surprisingly, the obvious inclusion of the likes of Ronald Reagan and George W. Bush is kept brief, their failings in the intellectual realm being so transparent as to hardly warrant a foot note in this hefty 867 page tome.  Désespéré argues that such characters are virtually blissfully unaware of the repercussions of their actions.  To be classified as a true arsehole a certain self-awareness is required; an awareness that is then immediately ignored or projected against a background of an enormous, self-righteous ego.  The true arsehole does not believe God to be on his side, he knows it.  The arsehole can without conscience release a faulty product, bring down a banking system or launch a military attack upon civilians.

Yes, arseholes are to be found in all walks of life from the jobs-worth security guard (“Sportcullis” is the amusing word utilized for such characters in a nod to the hilarious and hitherto unmatched  Not 1982 rip-off calendar) to the wanna-be business tycoon, such as those that grace the set of Dragon’s Den.  The sexing up of entrepreneurship and extreme wealth in the 21st century and the parallel influence of the Self-Improvement industry receives a breathless, almost poetic, 37-page non-stop rant, peppered with the kind of flowery language rarely seen in academia.  How Désespéré pulls this off while remaining credible is nothing short of staggering.

Gaining special attention in the contemporary English speaking world are characters such as Tony Blair, David Cameron, Barack Obama, Nigel Farage, Jamie Dimon, Alan Greenspan and Condoleezza Rice to name just seven.  What arseholes have in common is an overriding sense of their own immortality and importance.  They fail to comprehend that no amount of power or money will ever satisfy the empty rawness at the heart of man.  In a surprising discussion of ancient Eastern philosophy, the global phenomena is brought back to the personal level.  We are all human beings.  We are all mortal.  At heart we want the same things.  We differ in our means of obtaining this inner desire, this balance that we all seek.  Zooming back out Désespéré explores how despite their need for global acknowledgement and importance, top political and business arseholes have little grasp of the interconnectedness of life or the fragility of the planet’s ecosphere or indeed of the vastness of the universe.  It is the void of space that the author leaves us in; leaves us in a state of awe and of having a new view of this world.  Unless you are a total arsehole.

Faults?  The good professor perhaps does not investigate how the balance could be addressed.  What could we do as a society to minimize the destructive force of arseholes?  This is glossed over.  It is also natural to take issue with the claim that this edition of the book is a so called Scottish Edition.  Apparently a search and replace was run on the oft used word “ass hole” and it is replaced by “arsehole”.  Ditto words like “shit” and “shite”. Furthermore a few Scottish case studies are thrown in with Johann Lamont and Alistair Darling being a rather obvious attempt to cash in on the numerous intellectual pro-independence supporters that may elect to purchase the book in the run up to the referendum.  Interestingly Désespéré is a firm believer in independence for Scotland and in a candid foot note apparently claims that such a split in the United Kingdom may indeed signal a decline in the relentless rise of the arsehole.