Holistic Politics vs That’s what you are, what am I?

Posted on October 16, 2014 by formerdundeeman

Apparently Scottish Labour have better policies on women than SNP.  Apparently SNP have the weakest strategies in place on gender equality of the major Scottish parties when it comes to policies supporting women.  Of course what does this actually mean?  How is this evaluated?  Is it not a case of comparing some statements written on a manifesto somewhere?  Could it not be that SNP got side tracked and forgot to elaborate such points clearly enough?  Could it not be that the SNP were busy with other stuff like trying to save the whole country of Scotland and turning out a 700 page plan balancing everything from currency to war to economy to nuclear weapons to renewables to healthcare to education to oil to Europe?

United Kingdom in the year 2020 – Scotland voted No!

The complete idiocy of comparing policies as if they were on a giant check list is that it’s fundamentally impossible to address any significant policy individually without considering the whole ecosystem?  So Scottish Labour scoring cheap points over SNP on women’s issues is insane because when the whole United Kingdom – that Labour ensured we remain part of – goes down the toilet and begins to resemble the Victorian era again, we’ll not be very concerned about what some irrelevant party has on a bullet list. 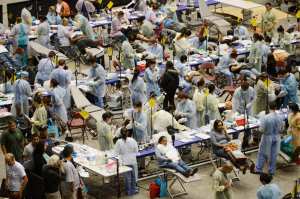 When the economy has gone to the dogs, when you are up to your ears in debt, when you’re homeless and on the street with your family, when you’re without human and worker rights, when education quality is dropping, when you need to go to a charity for healthcare, when you’re queuing at a charity backed food bank, when fracking pollutes the water and makes you sick, when radiation leaks from rusty submarines and cost optimized private nuclear power stations, when you exchange your right to vote for food and shelter, when you’ve lost every last scrap of human decency – then some bloody Labour policy on women’s rights is not going to make much of a damn difference.

I do not stop at the politicians.  The academics and journalists that evaluate and report on policies are also severely lacking in ability.  That supposedly intelligent people cannot think in a holistic way is frightening.  But then again is it surprising?  Weighing up countless factors and drawing conclusions on how they all influence each other is hard work and, in a world with little patience for more than a quick sound bite, is liable to leave you sounding wishy-washy and uncertain.  Ultimately it’s much easier to just shout: “That’s what you are; what am I?”  Over and over again.